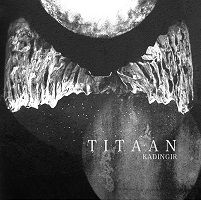 The blank canvas that is black metal enables those on the esoteric fringe to perform the unconventional. It’s why a band like Deathspell Omega is so enduring – you never know what you’re going to get, and when you do, more often than not, it’s golden. As the black metal scene/sound continues to open up for anyone (including girls! See: Myrkur), it essentially casts as an open invitation for bands like Titaan. Their origin unknown (same goes for whose actually in the band), Titaan deals yet another avant-garde blow to black metal’s staid and folded-arm past. One jaunt through

As so stated in the band’s bio, the project is a “merging guise of a concept dealing with the ancient Mesopotamic culture.” Such a look at Mesopotamia isn’t new in extreme metal – Melechesh have been doing it for years – so these conceptual dealings become a mere sidebar to the music at hand. Comprised of 16 songs (lots of short, instrumental “segue” jams), the girth of Kadingir is only matched by its difficult, totally unconventional nature. The run of the band’s sound traverses full-on blast assaults, and slower, if not mesmeric cuts, which appear to be Titaan’s better handle. (See: “Peta Babkama Luruba Anaku”)

Because Kadingir is so wrought with exotic elements and experimental dashes, the true spirit and thread of black metal get lost in translation. The appropriate lift-off and range can be found in only a handful of cuts among the 16; the rest of the time is devoted to navigating a complicated labyrinth of ideas that even in the “anything goes” world of black metal, might be pushing it a bit too far.

Preview of Kadingir on Soundcloud