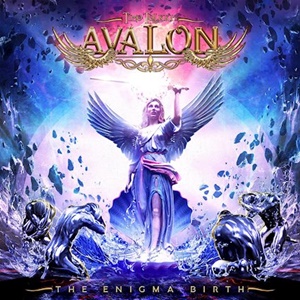 Originally delivering a trilogy of records under the Avalon umbrella per request of Frontiers Music president Serafino Perugino, The Enigma Birth extends the series into a fourth installment. An unusual working process takes place – songwriting handled by Timo Tolkki and Secret Sphere’s Aldo Lonobile, the latter overseeing production and the Italian musicians who handle with Timo and Aldo the foundation of these tracks. Working remotely are the singers – handpicked by Serafino based on the feel of the songs, and you get some heavy hitters all across the rock/metal landscape. The results are satisfactory, even with the methods being a bit of an assembly line in nature.

Timo as a guitarist and composer has exemplary abilities in the melodic power metal platform – the man has been satisfying those uplifting notes, speedy riffs, and memorable, emotive lead breaks in this genre for over 36 years. It shouldn’t be surprising that he hits that neoclassical sheen in a Stratovarius-ish angle right out of the gate with the title track, featuring Pellek hitting those upper falsettos with ease and Timo going toe to toe with keyboardist Antonio Agate for a dueling solo break. As the record progresses, the versatility comes to the forefront – mixing straightforward metal anthems and semi-modern power efforts with occasional progressive measures. “Beautiful Lie” puts Dream Theater’s James LaBrie in a mid-register context, allowing the driving riffs and guitar twists plus cyber-angled drums at times spacious angles, the mixture alluring and intoxicating. When you need something more tender and restrained vocally to match the proceedings, look no further than Marina La Torraca’s performance in the power ballad “Another Day”, while Fabio Lione gets into a familiar comfort zone in his two tracks “Dreaming” and “Without Fear” – a masterclass in grace, power, and dramatic intensity. Other singers of note appear from Jake E to Brittney Slayes, Caterina Nix to Raphael Mendes – while the songwriting and musical support aligns well for those who remember Stratovarius circa Visions, Destiny, and the Elements records.

Hopefully now that the pandemic is subsiding and borders for travel are opening, if there is indeed another installment of Timo Tolkki’s Avalon there can be more direct human engagement to put that personalized touch on the proceedings. As is, The Enigma Birth allows listeners to enjoy the fourth installment of this power packed project with pristine performances and prove Timo still can deliver the goods this deep into his career.