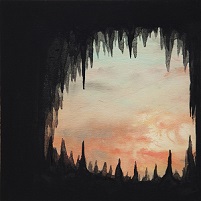 “Meh” said without feeling and a shoulder shrug. Brooklyn’s Tidal Arms self-released second full length, a self-titled affair that really is a solid effort, just doesn’t have a lot of staying power. I’ve listened to it many times over the past couple of weeks and I don’t see it getting many repeats after submitting this review. There’s elements of hardcore, doom, sludge, indie rock, technical nerdery, and post-whatever. You name it, they throw it in, but none of it sticks.

Things start out well on “Gooski’s Ladder,” a galloping riff backed by a heavy rhythm that gives way to a melodic chorus with soaring vocal harmonies. Unfortunately the opener is the standout track and it loses steam from here. They slow things down on the second track, “Mirrorbox,” as it opens with a slow jangly guitar and melancholy vocals that progress into a heavier chorus but never really picks up the pace. They stick with this formula throughout the album and never really draw you in despite attempts to make things interesting. On “Jungle of Dust” they tip-toe into hardcore territory with some pretty heavy and technical riffs, ala Converge, but it doesn’t last long. “Mad Glacier” is an instrumental three-minute excursion into doom/sludge/drone that takes you to just about the half-way point and then it’s more of the same. Mid-paced tunes that start slow and simple, get a little louder, mix in a something a little different for a minute, then slow back down and end.

Ultimately Tidal Arms is just a boring listen, and hard to describe. Take a solid but wimpy indie band, say Minus the Bear, add in a dash of something heavy but not at all metal, like My Bloody Valentine, then just a pinch of some hardcore, the aforementioned Converge works, and water it all down. That’s a decent start. Solid ingredients, but the recipe but just doesn’t come together.