Thy Will Be Done – Temple EP (Eye. On Lion Recordings) 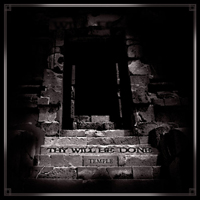 Caught with the unfortunate tag of being nothing more than a mid-market tour support act, Providence, Rhode Island’s Thy Will Be Done have wised up to the industry’s misgivings and started their own label, Eye. On Lion Recordings. Not having to worry about the overhang of pricy advances, annoying A&R reps, and botched PR campaigns has apparently given the band the impetus to bust out Temple, a collection of six songs

that surpasses their 2009 In Ancient of Days album. Lest we forget the band was picked to take part in Metallica’s inaugural Orion Festival

this past summer, so perhaps things really are on the up-and-up for these gents.

The band’s thrashy hardcore style has gotten tighter, with the riffs engaging in a death metal-like grapple, making the tough-guy portions even more tough sounding, as heard on “You, the Apathy Divine.” The roundabout American metal fashion of “A Lion and a Lamb” is another notch in the band’s belt, featuring a wealth of pit-ready batches, along with J Costa’s inspired bark. The EP’s departure track comes in the form of “Epiphany (Boaz),” where droning sludge metal runs head into a lovely little acoustic guitar

If Thy Will Be Done is looking for a home

run with Temple, they probably won’t get it, or hit it. Rather, incremental gains by way of solid, sturdy releases like this may (key word: may) pay off down the road. For now, they’re one of those unsung acts who have a very steep climb, only because they were a few years too late to the metalcore party.