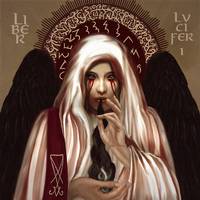 Here’s some well-educated and semi-sophisticated satanic black metal chockfull of ancient esoteric philosophies. If music is going to be occultist or satanic, it might as well go full-throttle into the occult and frolic with Satan all the way! Sin to the greatest extent and explore the darkest corridors of the underworld with Thy Darkened Shade. They’re deemed as followers of Satan, children of Lucifer, preachers of Azazel and worshippers of Prometheus, but most of all these Greek metallers are fascinating musicians.

TDS is a cult of two metal masters, a duo of black magic sorcerers. The A delivers the vocals, chants and rites. Multi-instrumentalist Semja is all over the place! He plays lead, rhythm and acoustic guitars, 6 and 8 string bass, mantras and qlilphotic ambience, as well as music/lyric writer. Additional guests include: the Choir of the Damned, offering their Luciferian chants; H.G. on drums; featured on track 11, “Δαήμων Ὁ Φώσφορος/Daemon Phosphorus,” Necromantia’s Magus Wampyr Daoloth tosses in his narrations and chants. Sorry guy, I still say Principality of Hell was a washout but props to your contribution to TDS!

In “Liber Lvcifer,” the intro melody is entrancing and the majority of its mass is aggressive as it barrages in a fury, vocally and instrumentally, and the remaining two minutes of the piece is light and luscious with smooth guitar and soothing chants. Indeed, with TDS, every word is either screamed or chanted, nothing in between. “Saatet-ta Renaissance” is a bit bizarre but comes together well, it’s Ancient Egypt meets the Renaissance as chants to the Egyptian snake devil, Apep, Saat-et, the darker of earth, harmonizes with acoustic medieval tunes. Songs such as “Drayishn I Ahriman O Divan” and “Deus Absconditus” are nerve-wracking and reckless thrills, which are great if one is in the mood for high-strung energy but discomforting if one is in the mood for peace and quiet, but who wants that? Scream it loud and proud!

With Liber Lvcifer I: Khem Sedjet, TDS introduce us to their Gods, invite us into an adventure of ancient divinity, ask us to bring our spirits high into the darkness, break the illusionary barriers between good and evil, understand the things humanoids are not meant to know, fathom immortality by understanding life and death. Of course, music holds the key to all. In the words of TDS, “you are either one of us or you are relics of cosmic disguise.”

I’d say it’s easy to figure out whether one is among their kind or dubbed a relic of disguise, simply listen to this album and be both patient enough to endure the 78 minutes and strong-spirited enough to enjoy their rituals. This is a particular style of metal which is exotic, cryptic, archaic, eccentric, diverse and mysterious. As TDS say, it’s the age of Acausal Necrosophic Black Metal. Enjoy.