of this variety drift to, Thy Catafalque (who is the one-man project of Hungarian Tamás Kátai) creates a glowing, futuristic sonicscape with a sheen unlike anything that’s come across our desk all year.

Kátai handles all instrumentation, including the always-tricky drum programming (they sound real enough). His guitar

work is largely simple, creating the same ebb and flow of former Goth luminaries Tristania (circa Beyond the Veil) and Samael’s Ceremony of Opposites days, so in turn, there’s an ample amount of dreary and Euro-happy melodies being tossed about, especially on album highlight “Kel keleti szél.”

The rubbery Goth angle of “Trilobita,” is bolstered by Kátai’s springy vocals, sounding distinctly Hungarian (all of the songs

are in the man’s native tongue, obviously) and catchy at the same time. Even when Kátai drops in poppy synth lines like on the aforementioned “Trilobita” and “Vashegyek.” “Vashegyek” is especially noteworthy thanks to potent guitar harmony section that off-sets the song’s most dreary industrial landscape. From there, the pulsating “Kék ingem lobogó” and tribal “Tar gallyak végül” provide variation and different sonic manifestations from the preceding tracks in a not-so traditional Goth/industrial metal fashion.

Where Season of Mist is finding bands like Thy Catafalque is beyond our realm of comprehension, which explains the otherworldly reach of Rengeteg. As much as we try toss around weird adjectives in an effort to make some type of connection, there’s no other way to push this other than listening to it. Good luck figuring this one out. 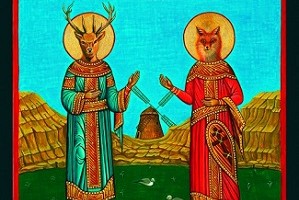