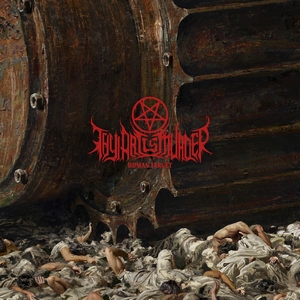 Following up their last album, Dear Desolation, nearly two years later, the steamroller of Thy Art is Murder continues to march forward. Viewed as one of the biggest names in the deathcore genre, they’ve done their best to escape it’s limitations with their more recent offerings (particularly on their last release). Human Target is enjoyable for fans, but does feel a bit like Dear Desolation part II.

The band’s fifth full-length effort at this point, Human Target does retain all of the necessary ingredients of Thy Art is Murder. You can count on some absolutely rumbling breakdowns, vocalist CJ McMahon’s in your face growls, as well as some intense battering on the drums as the band speeds up. As with Dear Desolation, there’s a push to simply get beyond the usual deathcore tropes, and there’s a dark and dreary atmosphere to a number of the tracks on the album. Slowdowns with more insidious riffing and eerie/twisted guitar melodies (“Welcome Oblivion” or “Eye for an Eye”) offer some separation from the band’s more blistering segments and help to flesh out some of the longer songs. There’s some real stompers at the onset of the album with the one-two set-up of the title track and “New Gods,” as well as the later “Voyeurs into Death” for those who just want a bit of an adrenaline rush. The lyrics, outside of the ‘a bit on the nose’ “Make America Hate Again” (can see the t-shirt already if it hasn’t been made), continue to be a strong point as well.

Those seeking some sort of evolution in Thy Art is Murder’s sound aren’t going to find much of it here, but for fans of the band that want some visceral pummeling as their soundtrack to the summer should get some kicks out of Human Target.