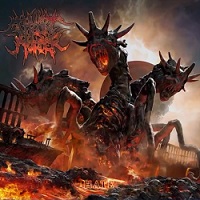 One day, someone with way too much time on their hands (cue the Styx song) will take all of the deathcore bands who parlay the same beatdown, and will do some type of side-by-side comparison on YouTube. It would be quite funny to see, only if to further explain the banality that comes with the style of extreme metal. These bands, without question, re-write and plagiarize themselves to the nth degree, so much so, that the style is 100% a parody of itself. Australia’s Thy Art is Murder is deathcore’s newest hopeful, but on their sophomore album Hate, they prove to be nothing more than a demonstration in futility in numbers.

Before we bring the high heat and knock these chaps for their largely flat and trendy offering, it must be noted the band is capable of doling out some high-rung guitar runs. They’ve done some homework in brutal death metal, with the core parts of “The Purest Strain of Hate,” “Vile Creations” and “Defective Breed” each having smatterings of Floridian-styled action. They’d have a much better chance at staying afloat if this aspect of their sound was in focus, but once the telegraphed and overplayed beatdowns come knockin’, forget about it.

Thy Art is Murder have had over six years to hone their craft (they were formed in 2006), meaning, they’ve had plenty of time to assimilate themselves the various trends that have come and gone in that span. Therefore, it makes Hate all the more lackluster…you wonder if bands are even paying attention to what’s going on sometimes.

Thy Art is Murder