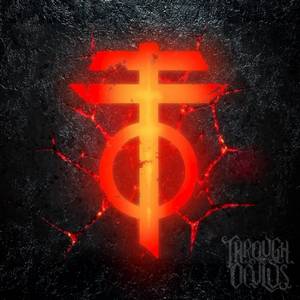 Through the Oculus is a new metal act hailing from California, and their self-titled effort is also their debut. While there’s a number of acts at this point that are carefully balancing a line between something of raging heaviness and more delicate melodies, Through the Oculus stands out as being instant ear-catcher. Their debut does an excellent job of shifting contrasts without jarring the listener – giving them a bounty of both heavy riffs and catchy moments.

Using different elements from melodic death metal, metalcore, groove metal, and thrash employed in a modern package, the approach that Through the Oculus uses can vary between tracks. It’s a nice strong suit to have, and it gives them a solid range of emotions as well – even across a single track. Opening cut “Lilith and Lazarus” offers a glimpse of this while switching up between more thrashy and driving riffs that deliver a brutal punch and more gentle yet groovy melodies with some more ethereal singing (well mixed with some backing screams). Single “Order of the Eye” has a more melodeath mixed with ‘core feeling, ushering in upbeat yet thoroughly heavy riffs and melodies that provide an energetic force to power through the song. On the more melodic and atmospheric side of things is “Obses,” which uses some dark, rolling grooves but also drops one of the more memorable melodic choruses on the release. A more restrained vibe is also found on “Amorphous,” and the emotional opening to follow-up “Dystopian Love,” which ends up a powerhouse with just a smidge of anger mixed with melancholy.

Looking for something modern that dishes out some atmospheric and emotive melodies, while maintaining a strong degree of heaviness? Through the Oculus should be right in your wheelhouse, striking an important balance of different influences to develop something greater than the sum of their parts. A strong debut worth checking out.