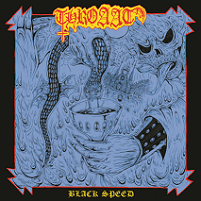 Lots ‘o suggestion and persuasion with the double “A” here, “Throaat” giving ample leeway to how they sound, what they’re about, so and so forth, without even having as much to dive too deep into the thing. The band hails from Brooklyn, which may put up the Hipster Radar, but based on the band’s promo shots and visuals, they appear to be a trio of harry, necro underground dudes. No worries there. Black Speed is the band’s third EP of 2015, which insinuates they too, have lost faith in the traditional album format. That, or they record songs as soon as they’re completed and toss ‘em up for release.

Culled, as expected, from the brigade of 80s thrash and death bands, Throoat play a derived, but demented form of extreme metal. Even though there’s no real weight (or outward) creativity to their riffs (heard ‘em all before), the ferocity found in Impurifier’s vocals are enough to get the band by. Furthermore, Mr. Impurifier handles drums while singing, turning in a King Fowley-like performance. (Surely the Deceased main dude would approve of a band like Throaat.)

Five jams here, including an iffy and sloppy cover of Venom’s “In League with Satan.” However, the original was pretty sloppy too, so there you go. Outside of that, some kicks and heads-a-banged will be had on “Exploding from Living Flame” and the rambunctious tail-end of “Rampage.” Anything else is really a toss-up. Just more retro…and then some.