Threads of Fate – A Funeral for the Virtuous (Self-Released) 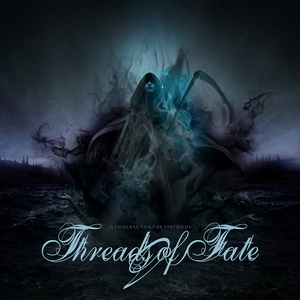 Every once and a while, an album (or EP in this case) can surprise you. The expectations of Jack Kosto (Seven Spires) on guitar with Vikram Shankar (Lux Terminus, Redemption) led to the idea of an album that was bound to be emotive and progressive in scope. And while the initial expectations are satisfied, a darker and more aggressive side to the band is also here, complementing the cinematic quality and bringing it into something more epic and grand.

Combining that massive scope and emotive feel of a band like Evergrey and merging it with an occasional melodic black/death metal vibe (think something along the lines of Wintersun or Dimmu Borgir), Threads of Fate are onto something potent. Without going into the genre game further, suffice to say the band is playing into a wide variety of influences of both the classic and modern varieties and they nail it all. The album starts off with a bit of melancholy as “The Skeleton Key” lands into some dreamy guitar leadwork and introduces you to John Pyres standout clean vocals. Dropping in some gentle piano as Pyres kicks in, the element of sorrow is awe-inspiring. Then it kicks into much darker and heavier territory as the band escalates into harsh vocals, triumphant synthwork, and black metal-esque riffing. But they never dive into hokey and clichéd territory – they manage to keep the emotional core no matter what direction they go in. Admittedly, much of this is due to Shankar’s work as the keys can be one that makes or breaks a band like this. It’s a powerful performance that holds its own with the guitars and never falters into over-the-top fluff. Not to downplay the importance of Kosto’s elegant solos and grand riff variety, or Pyres ability to equally soar or snarl with charisma – the whole band is firing on all cylinders from start to finish.

Taking some familiar elements, Threads of Fate succeed in crafting a sound that is their own. Something that can be triumphant, gothic, filled with sorrow, or bursting with adrenaline, it’s all wrapped into a tidy bow where the emotions are genuine and evoke something from the listener. It’s hard to listen to A Funeral for the Virtuous without feeling the passion that exudes from the music itself, and it’s a true thrill-ride because of it. With a full-length already in the making, Threads of Fate are bound to take the world by storm sooner than later.