Lap this one up for a moment: “Vegan Straight-Edge Post-Metal.” That’s how Germany’s Thränenkind label themselves. Good for them. It takes a lot of guts to be straight-edge, vegan, and post-metal all at once, for like most un-hip things in life, there is a gaggle of detractors, many of whom lack the wherewithal to pursue such paths. Granted, it’s a bit irrelevant to the music on display, save for the post-metal aspect, which we’ll tackle in a moment. But the band’s second album, King Apathy, is quite the forceful, pointed display of melting pot metal.

“Post-metal” may not be the way to go with the Germans, to be honest. If we were to line them up against, say, classic-era Isis (think Panopticon), then we’re coming at it from two different angles. Isis was all about space, quiet-loud-quiet-loud dynamics and big, burly riffs. Thränenkind, on the other hand, display far more extremity in the work, starting with vocalist Nils’s intimidating, somewhat modern bark. He’s at his most jacked on “The Blood on Our Hands,” a number that indeed takes a serene, post-metal-like dive, only to blossom into a cascade of up-and-flowing melodies and thrash beats.

Don’t sleep on the morose undertones that skip along King Apathy’s ten songs. They’re the main function in cuts like “Ghosts,” or in particular, the mid-tempo “Drifter.” And the album is not without its climatic moments, as found on “Smokestacks and Concrete Walls,” which finds the guitar duo of Flo and Max weaving deadly speed-picking with slanted, crisp chord work.

Probably a bit too versatile and able to pull from several extreme areas at once to be simply post-metal, Thränenkind have demonstrated superlative growth on King Apathy, which towers over their The Elk debut from a few years ago. Lots going here, from the message, to the fresh, throttling take on modern metal. This sure beats a bunch of tattooed lackeys mucking about with nothing to say and without good tunes to boot… 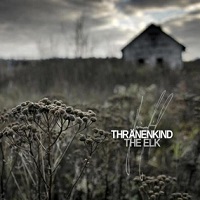