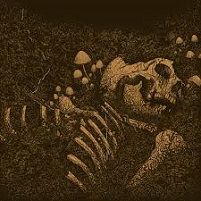 Tasmanian blackened crust metallers, Thrall, trek into a realm of treacherous woodlands, sinister spirits, and aspiring hopelessness in their latest album, uprooted and named after the haunted forest, Aokigahara Jukai. From the darkest shadows emerge the savage guitars and vocals of Tom Void, roaring guitars of Ramez Bathish, driven into the wilderness by the earthshaking drums and additional vocals of metalchick Em Støy, and grounded by the bass of Leigh “Rampage” Ritson (rather the phantom of him, for shortly after recording the album and completing the Japan tour, ceased as Thrall’s bass player).

Also known as the Sea of Trees or Suicide Forest, amidst the mountainsides of Yamanashi, Japan, coiling congregations of white cedars, pines and boxwoods feed from the volcanic soil of Mount Fuji and suckle on the decaying corpses of those who wander there to commit suicide by sacrificing themselves to the mercy of the woodland. Historically, it had long been a common place for the practice of ubasute -a custom where one is carried to a desolate place and left to die by desiccation, famine, or other suffering. According to Japanese legend, Aokigahara is infested with angry demons and haunted by vengeful ghosts.

The folklore of the forest is disentangled and woven into every song. The first title, “Longing for Death,” renders the suicidal desire that possesses one to stray into “Aokigahara Jukai,” where the viscous mass of trees “bathed in blood” devour all life by “Its Toothless Maw.” Fall into bigotry with “Of Hate” and succumb to “Ubusute,” chillingly sung by Em in Japanese. Breathe in “cold ice-ridden air with fire in our lungs” through “The Pact,” and ascend with death in the ethereal chimes of “Ghost Chrysalides.”

Upon webs of moss, twines of vines, rotting leaves, gnarled roots, and sprouted mushrooms rest the scattered bones of the dead; these detritus graves brilliantly illustrated by Tom Void for the album art. In devoting the entire album, Thrall charms the mysteries of the decrepit, ghoul-engulfed forest. Come and enter the “arboreal gloom” of Aokigahara Jukai, like wandering into the shadows of the actual terrain, chances are you’ll never escape. 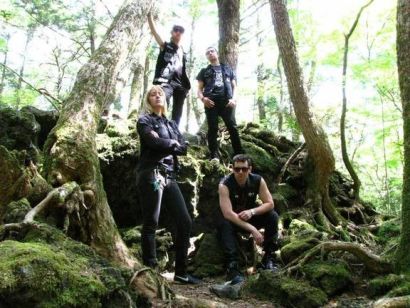