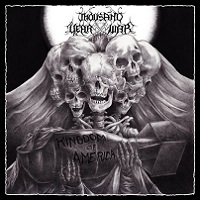 The product of multi-instrumentalist/vocalist Hiram Lohr, Thousand Year War is a poorly-conceived, ragged death/thrash concoction. Now, there’s no threshold for how far someone can push the double-tracked vocals envelope, but Lohr takes it several steps too far. Nearly all of Kingdom of America has Lohr doing two different vocal takes on top of each other, neither of which result in anything remotely hummable. It’s a like a war inside the listener’s head. Don’t take a day off, or you’ll be dead. (Extra points if you caught the Megadeth quip).

Positioned as a “rallying cry against the modern capitalist super-powers,” Kingdom of America has plenty of rah-rah moments for the 1%. However, we’re not quite sure if they’d want Lohr to be their mouthpiece. Once the band hits some type of thrash-stride, here come the maniacal, demonic vocals of Lohr. The dude can’t stay out of his own way, whether it’s on the spotty title track, or a cover of The Misfits’ “London Dungeon.” It’s no coincidence that the instrumental “Doom Rides These Mountains” is the best song of the bunch, where some triumphant melodies are unveiled, along with a seething power metal bravado. That’s more like it.

Lohr’s vocals are a total deal-breaker, so unless you fancy having two disparate voices barking political salvos at you, then Kingdom of America should probably be passed over.