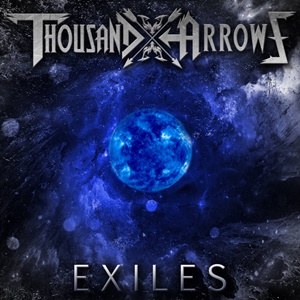 Going down the social media rabbit hole, Thousand Arrows from Vancouver, Canada came to this writer’s attention through a Facebook community group that supports power metal. Although after a few spins of their debut EP Exiles, it’s clear that the quintet possesses a varied approach that can be just as speed/thrash-oriented as it is rooted in power metal. The band has been together since the summer of 2014, so it’s quite apparent that these four songs aren’t cut from the run of the mill cloth – these musicians put serious time and effort into their craft.

Often Thousand Arrows will punctuate their speedier, twin rhythm attack with an equally interesting main drum sequence – almost progressive in points where triplet hits venture into Maiden meets Watchtower measures for “The Lord Ruler”. Conversely, the main guitar melody for “Wrath of War” lives for that uplifting Hammerfall/Helloween-ish charm, even as the subsequent parts develop from more of a classic/traditional metal anthem platform. Most of the material hovers in that five-minute mold, never overstaying its welcome while serving up enough tasty riffs and shredding sequences to get those metal juices flowing. And thankfully, the rhythm section gets just rewards in the mix and production, not buried or digitized to smithereens where you actually hear fluid bass lines and a snappy kit in their most natural state.

The main bone of contention for most in fully enjoying Thousand Arrows will come down to the unique phrasing and delivery of vocalist Sebastian Mantle. ‘Ear piercing vocality’ (their description, not mine) is quite apt when you figure out his shrieking or slightly sarcastic personal slant on things. It’s not the expected norm for the style, that’s for sure – more like Sam Kinison and Hades/Watchtower’s Alan Tecchio meeting up to front the outfit, which can make for a bumpy ride right out of the gate when you process the measured word spew within the title track. This could very well be a case of a younger band still finding their footing to attain an original sound – and for the most part, Exiles succeeds on that front. The band hopefully in the future will smooth out the singing parts to match the thrilling musical proceedings – as this is a meaty power/thrash group to keep an eye on.