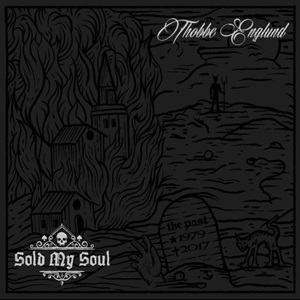 Choosing to leave Sabaton as their grueling 200 date plus a year road schedule and success ramps up may seem insane, yet personal priorities change as guitarist Thobbe Englund wastes no time writing and recording this solo album Sold My Soul. Delving into his influence bag of tricks, it’s nice to explore the roots of one’s musical and playing philosophy – making these 12 tracks a journey through the 70’s and 80’s hard rock and metal terrain that shaped the foundation for millions. You know the types – quick hitting guitar hooks, solid rhythm section work, tight lead breaks, and that keen sense of putting together all the parts in the right places. Taking many first takes as the final product also promotes that live, in the moment feel the record possesses cut to cut.

Everything from doom to traditional metal and American style hard rock penetrates the makeup of these songs – Thobbe recording the material in his own Falun, Sweden studio for the most part. His vocals have a gritty rasp that goes down smooth with your favorite spirited beverage – still melodic of course, befitting bluesy efforts such as “It Burns!” and the relatively up-tempo Maiden-ish jackhammer “Break the Chains”. Bassist Roland Westborn and drummer Johan Grandin reach back into the 70’s Motörhead playbook for the steady tempo and straightforward accents on “Annihilation” – giving the organ moments and fiery lead break that highlight reel boost to make this one of the standouts. Mid-80’s Accept leans into the echoing riff choice and alternate phasing effects for “I Am”, while there are many sections of “Steel & Thunder” that revolve around Kiss’ “Love Gun” if taken in possibly more of a Thin Lizzy direction. And if you are going to write a song that has the class and distinction to Black Sabbath circa Dio’s legacy – who better to supplement your ideas for “Wounded Knee” then the masterful vocal range of Astral Doors’ Nils Patrick Johansson.

Thobbe makes a tidy 40-minute album in Sold My Soul that reflect that early vinyl period – bristling in the pops and crackles that made so many bands a part of our childhood soundtracks. An addictive record that may be surprising to some, but should broaden horizons in terms of appeal as his singing, songwriting, and guitar playing come from the heart.