This Or the Apocalypse – Haunt What’s Left (Good Fight Music) 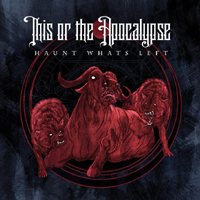 This is 2010, right? Just checking. This Or the Apocalypse don’t seem to think so and that’s fine – there are hundreds of more worthy bands that are also stuck in a timewarp, but at least they have the common sense to not play metalcore. Haunt What’s Left is straight outta 2005, right down to the breakdowns, stolen Swedish riffs, and shrieky, shrill vocals. All that is needed is the return of A Dozen Furies and we’re all set. Good lord, count us out.

With the endorsement of Lamb of God drummer Chris Adler, TOTA certainly have the chops (and a drum sound that pretty much apes Adler’s) to move their blasé metalcore ideas forward. Gang vocals of any kind are always cool, so such moments bail out opener “Charmer” and “Hellish,” even though they’re peppered with…more breakdowns.

A parade of sub-Swedish guitar melodies rain down on the annoying, saccharine “Lamnidae” and “Toro,” neither of which do anything to pull the album out of the metalcore morass. Additional numbers like “Hayseed” (kill the sugar in the chorus, please) and the Meshuggah-inspired “The Incoherent” are mildly redeemable, but would probably appeal to those who think August Burns Red are the “shit.”

We would say it’s remarkable that a band like This Or the Apocalypse can still exist and garner a fanbase after how much metalcore rubbed everyone the wrong way, but hey, there are those who still think rehashed ‘8Os metal is cool, think that re-writing Floridian death metal is fine and dandy, and will jump over anything that sounds Norwegian. It’s all in the ear of the beholder…just don’t expect us to be waiting for metalcore’s eventual revival. We’re still bracing for the return of Limp Bizkit, which is a far, far worse fate than anything This Or the Apocalypse and friends could bring.