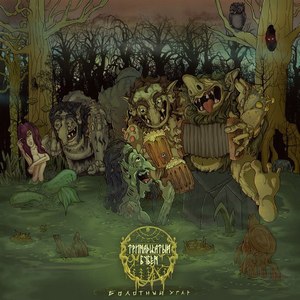 Even though this writer is far from a “sports guy,” it’s hard to look at that title and not think March Madness. But instead of bringing some hoops, Thirteenth Tambourine (if you couldn’t tell from the goofy yet fun-loving cover) is probably bringing the beers. You got it – another metal act that is all about the entertaining and less serious side of folk metal.

That’s not a bad thing – Marsh Madness draws from the same page as bands like Equilibrium, Finntroll, Trollfest, and more. Heavy on the fun, but also heavy on the tunes. It’s safe to say that despite the jovial atmosphere that most of the album employs, they take their instrumentation quite seriously. Of course, there’s some “humppa” elements (see the title track), but others dive headfirst into blastbeats (“In Scraps of the Rite”) and the band has no problem moving in whatever direction the song will have them go. Vocally, you get a bit of everything as well, going from troll vocals (“Drapa”) to throat singing (“In Scraps of the Rite”) to spoken word (“Spell”) to the usual growled/clean segments. That being said, despite the variety, it’s also one of those albums that never leaves the comfort zone of the genre at hand.

All particularly well-done and sure to get people right into the drunken dance madness, Marsh Madness exactly the type of romp you’d expect it to be. It sticks to the confines of the genre at hand, but has plenty of energy and feeling to spare. Those who like their folk metal with plenty of fun and bounce will certainly find themselves in a bit of a marsh madness for sure.