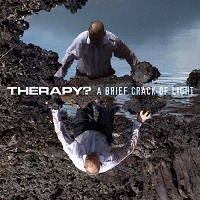 If 2009’s Crooked Timber was Therapy? putting quiet any talk people may have had about them no longer have anything relevant to say then A Brief Crack Of Light is them reinforcing that. Of course it takes off on another slight tangent now and again, because these boys never go for the obvious route. Going for a rhythmically heavy approach they’ve once again combined the dark experimentation of “Suicide Pact – You First” with the rawness and edginess of the early EPs (“Babyteeth” and “Pleasuredeath’” while making sure it’s all wrapped up in the melodies that they are so well known for, the glint of light in the darkness if you will. And they’ve not forgotten to write some great tunes either.

First single ‘Living In The Shadow of the Terrible Thing’ has the right amount of menace and melody to instantly fit into a classic Therapy? live set, featuring some great Andy Cairns lyrics, including “I feel time as a terrible ache.” “The Buzzing” is a horribly uncomfortable tune that’s well aware of the fact, while “Before You, With You, After You” has great hooks in the chorus to act as a massive counterpoint to the shadowy opening. “Why Turbulence” is a blinder, built on a huge, belching riff and “Plague Bell” is an all out wide-eyed rampage of thumping drums and breast-beating bass. Sweaty punk-metal explosion “Stark Raving Sane” has everything firing on full: a big pull-back riff, diesel powered bass, huge drum snaps and the line “it’s not my job to amuse you, entertain yourself motherfucker”.

Of course, what would a Therapy? album be without a few surprising moments? Three songs in and the instrumental “Marlow” rears its head like a bad choice, a mix of sunshine and the Temper Trap that just doesn’t work. Elsewhere though, “Ghost Trio” rolls forward on a loose wire riff, kept in place by Neil Cooper’s excellent drumwork and a hypnotic vocal it locks into a groove so thick it’ll get in your head and pull you back from distraction. Meanwhile, closer “Ecclesiastes” is a downbeat, vocally-treated comedown of a song which calls to mind “The Boy’s Asleep” from 1998’s Semi-Detached.

Some of the experiments might not work for people but if you don’t try you’ll never know and it’s far more interesting than stagnating. Plus if you’re not expecting something odd from Therapy? you can’t have been expecting much. No matter what direction you point your ears in you’ll find they’re bringing something new into the fold, pulling it apart and reassembling it as part of the Therapy? model.

While a lot of bands who get this far in their careers seem to just put out albums as an excuse to keep touring you don’t get that feeling here. No, instead you get that spark which was evident on Crooked Timber, that perfect mix of “fuck you” attitude, love of making music and desire to keep creating. A Fanfuckingtastic record full of passion, fire and more unexpected corners than a drunk driver.