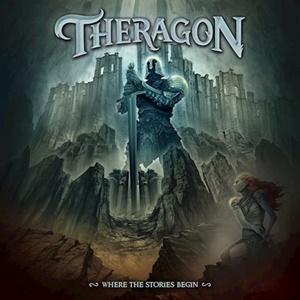 Theatrical splendor infused into a power/heavy metal context has created even more bombast and over the top mechanics for a crop of artists in today’s scene. The imagery, the pomp and circumstance, as well as the songwriting has led to artists such as Gloryhammer and Twilight Force moving up the ladder for significance given their body of work. Spaniards Theragon on their debut album Where the Stories Begin take influence from these acts, as well as the normal Teutonic power treasures, developing a sound that contains everything from orchestral/symphonic triumphant passages, soaring falsettos, and catchy guitar melodies to transport you to lands far, far away from reality.

As a vocalist Ferran Quiles has that upper register that can take command of the proceedings – slightly accented on specific English words, but able to hit those soaring Kiske/Sammet highs during choruses or trailing verses for “Theragon” and the marching “As the Wind” (where keyboardist Hector Palanca delivers strains of early Europe in spots). Accordion / circus themes penetrate “Drunk Dwarf Inn” – a playful number that allows galloping guitars and a semi-dancing/jig tempo stretch Theragon into folk territory while still retaining their power metal roots. When the band chooses to emphasize more of the orchestral/electric balance, you get a solid anthem effort in “The Eternal War” where the background voices go hand in hand to the musical theme – the multi-part harmonies during the chorus promoting that battle template perfectly almost as a tribute to Manowar. And what power record can’t be complete with an epic like “Talisman of Tears” – the lower register work from Ferran a touch spotty for his natural abilities, but the softer, clean guitar work during the verses as well as the compelling narrative aspects during the mid-section plus solid rhythm section mechanics keep interest throughout the almost eleven-minute timeframe.

Together since 2018, there are still a few elements to tighten up as far as the musical chemistry, especially in the production department as many of the tones are a touch weaker and distant than normally expected in this genre. And you may feel a little Rick Rolled by the “Never Gonna Give You Up” cover from Rick Astley, which while outside the box isn’t ideal or convincing for Theragon to pull off despite an energetic take. Where the Stories Begin will find its pocket of faithful followers, you just hope for a bit more originality and strength in the overall presentation on the next go around.