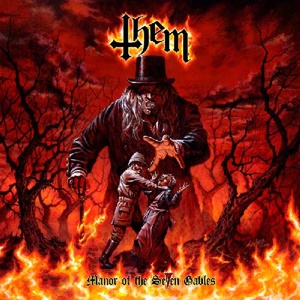 An international outfit with membership across the United States and Europe, Them developed from a King Diamond tribute act into an original entity – embracing a sound that crosses traditional, power and thrash lines. After releasing Sweet Hollow their debut in 2015 on Empire Records, they’ve aligned with SPV for a bigger push on the follow-up Manor of the Se7en Gables. Containing members of various power, progressive, and thrash acts past and present (most notably Mike LePond of Symphony X on bass, Markus Ullrich of Lanfear on guitar, and Troy Norr of Coldsteel on vocals), they’ve channeled their love of horror, fantasy, and literature into this theatrical-based outfit.

As a part of a trilogy of albums, there’s a continuous thread that runs through the storyline which references specific true places as well as taking fictional liberties for others – K.K. Fossor the narrator and main character, an anti-hero of sorts as you’ll discover throughout the album. The energy level fluctuates depending on the needs of each song – when you want a fierce, double-bass driven effort with crunchy riffs and falsetto-oriented melodies, “Circuitous” checks off all the boxes, bringing to mind everything from “Painkiller” to Testament circa The Gathering in its attitude, musicianship, and frantic nuances. Conversely when needing that somber arrangement with lower register melodies with whispering accents and reflective guitar/bass action, “Ravna” fits that bill – a ballad that has a bit of that older Savatage mystique against Troy’s eerie Pete Steele meets King Diamond twists and turns. The band are careful to add appropriate orchestration and supplemental narrative nuances to embellish but not dominate the proceedings – Them as musicians carry the bulk of the workload, as it should be on a metal album. Placing interludes like “A Scullery Maid” and “Peine Forte Et Dure” set anticipation in place for the next full cut – the doomy “Maleficium” winning due to its cannon-like drum hits, layered vocal harmonies, and Iced Earth-ish stair step guitar passages. There are even times where extreme metal elements come to the forefront during the tremolo-engaged speed picking and semi-blast beats for the epic, roller coaster closer “Punishment by Fire” – many riffs sure to swirl legions in the audience should Them pick this effort to air live.

Because of the diversity, Manor of the Se7en Gables could be appealing to thrash, power, and progressive-minded followers beyond the expected King Diamond fans who live for this genre. Curious to hear how the story develops for album three. 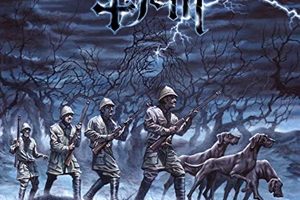