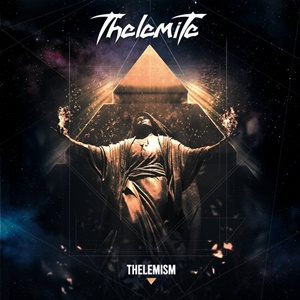 Superlatives often get thrown around when trying to garner buzz or hype surrounding an upcoming release. The problem is – when choosing to swing for the fences, a label or PR firm better hope the product (and band) up for reviewing can back up the claims. Greek heavy metal Thelemite for this full-length Thelemism has a line on the background sheet comparing these nine songs to ‘the Painkiller Part II album that Judas Priest never released’. A bold assertion that unfortunately doesn’t quite reach that watershed moment for 1990 in today’s marketplace – although the quality songwriting, hooks, and melodies contain enough standout aspects to at least warrant inspection and appreciation.

The twin guitar action of Zach Kotsikis and Yiannis Manopoulos has that harmony/guitar hero balance avid appreciators of 80’s-oriented acts from Saxon, Accept, and Judas Priest treasure. The fiery riffs and interplay during “Unholy Steel” melt the aural landscape, while a doom-oriented side a la Candlemass or Tony Martin-era Black Sabbath comes about for “Eternal Evil”. The closing ballad “Psycho” has an interesting acoustic/electric seesaw atmosphere, allowing Yiannis’ vocal melodies to be quite emotional in his lower to higher registers – giving off a mix of vibes like Alice Cooper to the Scorpions while the haunting, quieter background vocal support presents even more chilling nuances. You can also enjoy potent rhythm section parts that go from straightforward metal with steady groove abilities down to some speedier, flashier double kick intricacies – “In for the Kill” a latter example where drummer Renos Lialioutis sets the stage for fist pumping activities through thunderous double kick transitions to get back into the headbanging madness. What is interesting at times is the use of synths in a way that Judas Priest got criticized for during the Turbo era – placed in a supporting manner, as the guitar licks/tricks are high class and able to dominate in the best way possible for heavy metal horns approval.

The modern style production has its place from keeping Thelemite too cool in the eyes of some old schoolers – but overall Thelemism contains all the desired heavy metal performances, tones, and addictive songwriting aspects to gain favor beyond Greece into the hearts of most classic fans.