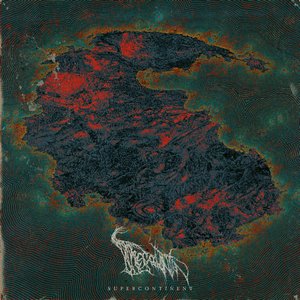 Popular culture, at least as much of it as I have been able to experience of it from my telework position, has really leaned into the term thicc throughout 2020. The first time Supercontinent played through, I found it appropriate, though I was unaware that Thecodontion is set up in much the same way as Bell Witch – that is, usually guitar is nowhere to be found. What follows is an intriguing death metal exercise without one of its signature instruments.

In short, yes. Thematically built around primordial earth and the many colossal things that roamed it, Thecodontion strives to embody the towering, lumbering, and colossal. The album isn’t doomy though, as tracks like “Vaalbara” and “Nuna” are rapid fire, near-standard fare death metal numbers built on riffs, leads, and unrelenting blast beats. Notably, of the album’s 11 songs, four are lower intensity instrumentals, including the album bookends “Gyrosia” and “Panthalassa” and inter-album transition pieces “Lerova” and “Tethys” – the latter of which carries a strong “Dawn Patrol” vibe.

Perhaps the bigger long-term concern with Supercontinent and Thecodontion’s methodology is the tendency of the non-interludes to blur together. This may owe to the bass/drums only setup, which while well-suited for the world of funeral doom, comes across a bit more limited here. Thicc-ish? Absolutely. Always memorable? Not so much. A fascinating offering off the beaten path? Yes.

If you’re inclined to walk with giants and experience the kind of exoticism and weird only I, Voidhanger can provide, Supercontinent may be just what you’re looking for.