Theandric – Flight Among the Tombs (Self-Released) 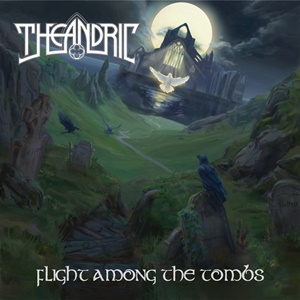 In 2011 vocalist/bassist Paul Tiseo began writing songs under the Theandric banner, hoping to develop his vision into a full-fledged band. It may have taken a few years while Paul handled all the instrumentation for the debut Up the Irons EP and follow up full-length The Door of Faith, but the lineup expanded to a quartet came back on the scene after a prolonged absence for another EP with Flight Among the Tombs. Locking down in Michigan during 2020-21 to rehearse and record the best four songs, the inherent abilities across the classic, traditional and progressive rock/metal platforms become apparent in these musicians from the first note to final keyboard fadeout.

Paul’s adaptive, fluid nature across multiple instruments pays dividends when conveying the right atmosphere and texture track to track – be it through church-like organ sequences a la Uriah Heep/Deep Purple for the opening title cut or creating an exotic, epic nuance against his normal bass duties for the follow-up “The Battle of Sherramuir” (the main riffs and syncopated snare/cymbal accents conjuring late 80’s Iron Maiden to a tee). The dual guitar harmonies and supporting rhythms from Bill Bogue and Aaron Wienczak (along with Paul’s third axe when needed) extend into classic doom or NWOBHM realms for “Condemned to Death” – the somber tempo, wah-wah angles, and measured circular instrumental work the stuff of legends, where everything from Candlemass to Metallica and Sabbath-era Dio comes into focus. The lyrical content takes on subjects from Christianity to history, literature and poetry – a perfect mirror to the musical proceedings. Everything has its proper place when it comes to musical tightness and interplay – Paul’s majestic, powerhouse vocal delivery the icing on top of an already delightful set of songs. Elements of Ronnie James Dio, John Arch, and Bruce Dickinson come up as obvious reference points, especially on the mesmerizing 7:38 closer “Ozymandias” – the keyboard/guitar runs delving into 70’s progressive rock mastery.

While only four songs, Theandric go for quality over quantity as these tracks pack a lot of musical information over the almost twenty-seven-minute run time. Traditional metal, classic progressive rock, and heavy metal followers in general can all appreciate the content of Flight Among the Tombs – let’s not wait another eight plus years for the next release.