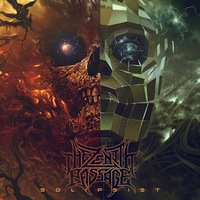 Bursting onto the scene with their 2013 EP Cosmic Dissonance, anticipation has only grown to see how the band would fare on their first full-length. Gaining even more stock with guitarist Justin McKinney also joining The Faceless in the timeline that followed, The Zenith Passage have a lot to live up to. They don’t fall short, and this album is as about as “Unique Leader” as it gets.

Bursting with neo-jazzy riffs, flashes of speed and dizzying technical infusion, and some layering of atmosphere, Solipsist takes a few listens to get a real grip on all of it. The fury and chops of a song like “Deus Deceptor” is bound to excite fans of Archspire and The Faceless to no end. There’s a definite wow-factor in taking it all in, with the band wisely never pushing things to the point of no return, where you begin to see it as a technical display instead of a song. Some mid-paced sections and groove help with this, as in “Hypnagogia” and the very headbang-friendly opening to “Luminary Singularity.” Some of the lead work is starkly melodic, as is the case with “The Dissension Concensus,” and also works to create some contrast to the technical flair. There are some clean vocals here and there to spice things up, a la “Simulated Reality,” and all tastefully add to the album instead of pulling it in a different direction or becoming formulaic. Toss in some synth-laden atmosphere with “Holographic Principle I: Emergence” and the jazzy “Dreamsphere” and you at least get a few moments to get your brain reset before the madness continues. An added feather in the band’s cap is the frequently audible bass, which delivers some nuance in addition to the low-end. Keeping things at around the 40-minute range, the band also grasps that this level of technical playing isn’t meant for an hour-long opus (where one’s head might actually explode).

The type of album that will get modern death metal fans drooling, Solipsist captures the spirit of genre to a tee. Between the balance of tech, atmosphere, and melody, The Zenith Passage are doing some exceptional stuff. The year’s first must-have tech-metal release.