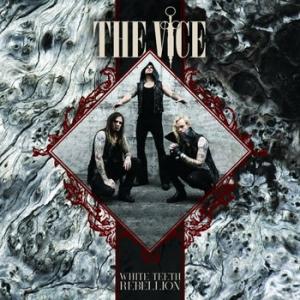 Forming in 2012 and releasing an EP and full-length, Swedish trio The Vice sign with Noble Demon to release their second album White Teeth Rebellion. Putting together a cocktail of death, angst and rock & roll, these nine tracks possess an interesting mix of classic metal, old fashion hard rock, and blackened influences. Maintaining a sonic purity, the material has a primal atmosphere and intensity that grabs you by the ears and won’t allow surrender until the final moments of sound subside.

Many times the melodic element comes from bassist Charlie, pounding the low end notes of “Run to Seed” into your head as the waves of guitars, steady in the pocket drumming, and apocalyptic blackened delivery from Rickard provides darkened, lurking charm to the mix. Rickard as a guitarist provides layers of chord mechanics – occasionally blistering and dissonant, at other times straightforward, rocking, and addictive. Some of his best work occurs on the circular, bluesy “A Barren State” and the doomy to jagged textures during the mysterious “Antizeit” – aware of the fact that as a guitarist he needs to be emotive, expressive, and versatile. There’s a 90’s aspect a la Oasis to some of the main musical hooks crashing headlong into Tribulation, Guns n’ Roses, and Queens of the Stone Age – an odd assortment of influences but The Vice somehow congeal these acts into something all their own. The vocals push the blackened edge to keep the band a bit more underground – but it’s nice to occasionally hear some slightly whispered or calmer melodies in the six-minute closer “Deluge” where once again Charlie often takes the lead during the instrumental sections with some impressive, pumping/ slightly progressive bass lines.

We need more three-piece bands like The Vice soaking in the despair, turning into blackened hard rock with metal and punk angst and churning out songs that channel your frustrations in a better direction. Those who love a broad cross-section of musical genres will find something to dig within White Teeth Rebellion.