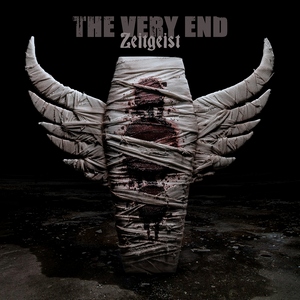 Now nine years removed from their last effort, Turn Off the World, The Very End finally returns with a new album in tow (along with some new band members as well). The Björn Gooßes-led (ex-Night in Gales) act has enjoyed a groovier approach than said band while still giving off some of those Nailwork-y melodeath vibes. Zeitgeist does it all with just as much aplomb as you would expect.

Modern melodic death metal with a helping of thick grooves is the approach, and even with a few line-up changes, the band sounds just as addictive and lethal. Björn Gooßes’ growls and uniquely styled clean vocals are still the front and center for this act, and he has the strength to carry the weight. “On Parole” does a nice job of providing massive hooks in the chorus with his effective cleans, and its augmented by some slick melodic guitar melodies – giving the rolling grooves some balance to work with. Other songs, like the title track just dive right into the gusto, dishing out some frantic thrashy tempos and furious solos and don’t relent. “The Day it All Went Black” operates with groovy mid-tempo riffs at the forefront, offering yet another flavor for the band to deliver. It’s these sort of changes that help to keep the album feeling quite fresh by the time the end rolls around. Between the clean vocal hooks, strong grooves, and sheer number of melodies, there’s almost a constant stream of different things to tune your ear towards.

A long time coming, but Zeitgeist sits right on the same level as The Very End’s previous efforts. Gooßes has always had a more unique style with vocals and this act really gives him some room to operate at maximum impact. An easy sell for melodic death fans across the spectrum.