About as bonafide of a death metal “vocalist” as we have, Bjorn Gooses announced his departure from German melodic death metallers Night in Gales to focus on the band in question, The Very End. It was an unexpected move given Gooses’s substantial role within the band as lyricist and art director, but it sounds as if the man doesn’t feel like juggling two bands at once. Or he doesn’t feel as if Night in Gales can top last year’s brilliant Five Scars. That’s for him to know and us to find out.

Turn Off the World is the third album from The Very End, with the first two (2008’s Vs. Life and 2011’s Mercy & Misery) having roughly the same visibility as Night in Gales’ Necrodynamic. Translation: it was nil. SPV seems to be pimping this one hard, though, and it’s a wise and confusing move all at the same time. Reason being, The Very End sounds a lot like Hatesphere, who did a stint on SPV in the mid-00’s, garnering little in terms of a promotional push. Thrash and death bands not named Sodom have a hard time on this label for whatever reason, so hopefully The Very End doesn’t get left at the alter.

What The Very End does do well is fuse the worlds of melodic thrash and death metal, with Gooses providing the push over the top for at least a half-dozen of these songs. Cuts like “Iron Sky,” “The Black Fix” and album highlight “The Last Mile” benefit greatly from Gooses’s ability to volley between his patented razor rasp and still-developing clean

vocals. It appears the emphasis is for Gooses to knock down the pins with well-sung choruses and he delivers, and along with instantly memorable numbers like “Maelstrom Calling” and album closer “To Feed on Hope,” The Very End have whipped up an able-bodied album that bounds across multiple styles with ease.

Gooses is one of metal’s most unsung commodities; a singer capable of carrying a song by himself. With The Very End, he shoulders more of a load than he did in Night in Gales, yet Turn Off the World is easy to like joint, hopefully setting Gooses up for a very fruitful post-Night in Gales career. 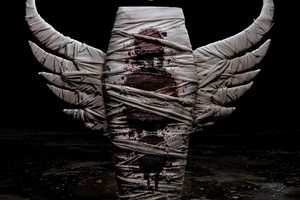