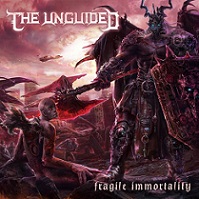 Composed mostly of ex-Sonic Syndicate members, The Unguided’s debut, Hell Frost, sought to show the world that they had not lost their metallic edge.  Playing it safe, it waded through pretty familiar melodeath waters, but was nice to see that we hadn’t heard the last of Roger, Richard, and Roland.  Waiting three years to follow-up their debut has paid off, with a bigger label behind them, and the band more willing to test the creative waters.  Fragile Immortality sees The Unguided more comfortable in their skin, and hungry to spread their word.

It almost goes without say that Fragile Immortality isn’t exactly re-inventing melodic death metal, but some slight changes keep things interesting.  On the more metal end of things, tracks like “Carnal Genesis” and “Singularity” see the band flexing their riff muscles a bit harder than before, but it’s “Defector DCXVI” that is the album highlight in this regard.  A galloping number that keeps burning through an adrenaline-fueled and addictive chorus, this isn’t just the best song on the album, but the best melodic death song since Soilwork’s “Spectrum of Eternity”.  Solos take a bigger presence as well, with some real rippers on “Granted”, “Oblivion” and “Unguided Entity.”

With an emphasis on getting the heavy side heavier, the melodic side of the band gets some attention as well.  Thankfully, the band avoids ballad territory, and delivers the lighter-raising “Eye of The Thylacine” instead, with clean vocalist Roland even reaching into a few powerful falsettos.  “Enforce” echoes a similar sentiment, with some verses that are guitar-free, relying only on Roland’s unique and charismatic vocals with some background synths.  Of course, melodic choruses have been The Unguided’s bread and butter, and single “Inception,” along with “Only Human” and “Oblivion” are happy to oblige the listener with some moments you’ll be humming along with for weeks.

Fragile Immortality is The Unguided at the top of their game.  They’ve seemingly perfected their art of melding heavy riffs and melodic choruses.  While the formula is still somewhat predictable, it’s pulled off at a level that only a few others (Soilwork, Scar Symmetry, Solution .45) can achieve.