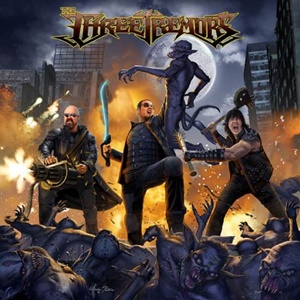 Clichés abound in the best heavy metal circles. Louder-faster-stronger. Go big or go home. We want our music so powerful that it can leap tall buildings and crush all naysayers oblivious to its subtle nuances. Thus when Cage/Death Dealer / Denner-Shermann singer Sean Peck picked up the mantle from a ‘suggested’ premiere vocal triad of Dickinson/Halford/Tate years back left unfulfilled, The Three Tremors came into being with Tim ‘Ripper Owens (ex-Judas Priest) and Harry ‘The Tyrant’ Conklin (Jag Panzer). This is their self-titled debut, musically rounded out with fellow Cage musicians (guitarists Casey Trask and Dave Garcia, bassist Alex Pickard, and drummer Sean Elg) and as one would probably expect, it’s almost an hour-long adventure into OTT, high-octane heavy metal with power and thrash aspects abound.

If you came into this thinking there would be loads of subtlety, this is not the band for you. All three vocalists possess multi-octave prowess and can shatter glass in a nanosecond through their falsetto shrieks and screams. Choosing to intertwine the three vocalists throughout the songs conveys a Judas Priest meets Testament on steroids output, from the double kick churning madness that is “Bullets for the Damned” on through to a relatively controlled mid-tempo anthem such as “Sonic Suicide” these musicians understand they can’t be locked into overdrive at all times, that dynamics allow for standout mood moments. Tackling the importance of the Pearl Harbor attack for US involvement in World War II on “Fly or Die” with supplementary narrative elements, the melodies and attacking riffs make you feel a part of the battle, the music rivaling Maiden as if taking on a bit of that Bay Area thrash sheen. The Three Tremors would not succeed if it was purely vocal driven – yes Tim, Harry, and Sean carry their weight as premiere singers in the metal landscape – but there is plenty of catchy guitar hooks, shredding, and solid rhythm section action that should send fists flailing and gain hair windmill approval (“When the Last Scream Fades” a personal favorite).

By the time the title track namesake finishes the record, most listeners should be won over by the sheer talent and effort it takes to pull this off convincingly in a genre already ripe with classic albums. This is only the beginning for The Three Tremors – sending shockwaves into a scene looking for future benchmarks to influence a new generation.