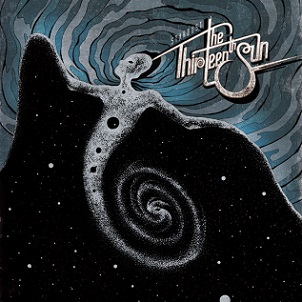 At times, The Thirteenth Sun vocalist Barna Radu Liviu sounds so much like Ulver vocalist Kristoffer Rygg (aka “Garm”) that you’d think Mr. Trickster G. himself ended his self-imposed metal exile. Indeed it is one of Garm’s former bands, Arcturus that provides the influential foundation for The Thirteenth Sun, a Romanian entity who came into being in 2011. As evidenced by the album cover and proliferation of deep-space reckonings, the band’s Stardust full-length debut is a headlong trip into the outward, otherworldly spheres of extra-terrestrial avant-garde metal.

The Arcturus comparison is certainly fair and ripe, with The Thirteenth Sun apparently having no hang-ups on traversing the same loose, psychedelic realms the Norwegians did on their invincible 1997 opus La Masquerade Infernale. The chord progressions and patterns of a song like “Melting Skies” certainly indicate as such, with the band following a piano lead set along to careful chords. But as indicated at the top, Liviu is clearly a Garm disciple. His patterns and cadence are oftentimes a blatant reflection of Garm’s work, only without the innate quirkiness and occasional falsetto appeal. Imitation aside, Liviu does manage to have a few moments of note, including some graceful caterwauling on “Universe is Burning” and heady croons on “Planes of Creation.”

Perhaps wisely and forebodingly, there is no mention of Arcturus or any of Garm’s subsequent bands in the press materials (or Facebook page) for The Thirteenth Sun and Stardust. That would be a bit too telling. But in reality, Arcturus is an awfully difficult band to ape. For The Thirteenth Sun to even be able to somewhat convincingly tap into Arcturus’s one-of-a-kind stratosphere says a lot.