The Spruce Moose – The Moose Is Loose (Self-Released) 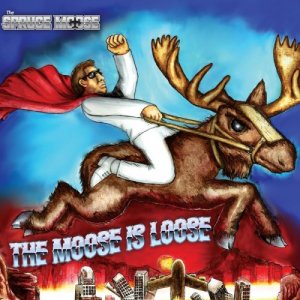 A sense of humor is front and center with this Canadian power metal act. From the superman figure riding the moose on the cover, to song titles, and even reference points in the lineup as ‘unwitting patsy, lead tax fraud, and rhythm tax fraud’ – it’s obvious The Spruce Moose can take the piss out of themselves, all in the name of a good time. Together since 2014, The Moose Is Loose possesses solid musical mechanics and knowledge, as these eight tracks propel with enthusiasm that borrows from both the North American and European philosophies of the genre.

Immediately noticeable when taking in “The Best Choice I Ever Made” or the follow-up “Don Peyote” are the eclectic screams and clean mid-range to higher register action of vocalist Danial Devost. Banshee-like in many of his shrieks, the lower aspects work better based on his capabilities – as it can be a tad pitchy in comparison to the Michael Kiske/Tobias Sammet level of professionalism. His musical compatriots supply hefty power riffs, varied double bass/groove attack, and even times where bass solos appear (check out “Mr. Bones’ Wild Ride” in that regard). Thinking outside the box in spots for an acoustic intro into some blackened/speed action guitar-wise within “In Sandwich Diaboli” proves The Spruce Moose aren’t always stuck in uplifting, Teutonic-oriented territory, the song stretching things into Scandinavian meets Voivod-ish textures.

Listeners should appreciate the band’s outlook on dynamics – escaping much of the clichés especially in the rhythm section work of bassist David Pollock and drummer Dylan Mooney. Their progressive meets groove tempo intuition during the instrumental “Spruce Jam” hints at a love for Rush and Iron Maiden – allowing the simpler guitar maneuvers room to breathe. And you can’t help but smirk at lines like ‘karate chop a child’ and ‘to the bankers land I fly, shoot a man just like his cheese’ in “NU.S.S.R.” – taking on serious topics of religious corruption against imaginative and nerdist outlooks that are as entertaining as they can be hilarious. The Moose Is Loose serves up an interesting power metal cocktail that has the Canadian stamp on things – giving The Spruce Moose a diverse take on a genre. Now looking for a new vocalist, future work could up the curiosity/quality of the group.