The Showdown – Blood In the Gears (Tooth and Nail Records) 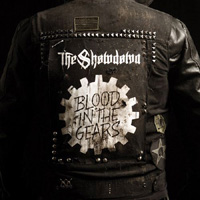 For all of the endless pontificating we do about how God-awful Christian metal is, it takes a band like The Showdown (and let’s not forget Believer) to give the niche at least some credibility. Since it’s not always apparent what singer David Burton is singing, the Bible-thumping message (these are stories, actually) is lost, allowing the band’s pseudo-advanced take on Pantera-meets-modern thrash to take hold. And surprise, surprise, there are portions of the band’s third album, Blood In the Gears that are damn legitimate.

As meat-and-potatoes as The Showdown are, they manage to lay out roughly a half-dozen bruising, Pantera-ready riffs, along with some king-sized grooves. The production is a bit too sterile and over-produced (read: lots of triggers, fake drums), but if anything, it does give the riffs of Josh Childers and Patrick Judge an extra little “oomph.” And as deceptively simple as they are, they sure pack a nice punch on album opener “Man Named Hell” (think “Cowboys From Hell”) and album highlight “Heavy Lies the Crown.”

The occasional Southern metal outburst happens from time to time, as do clean vocals from Burton (who should stick to shouting), and while neither of these detract from what The Showdown are doing, they aren’t nearly the blatant attempt at being commercial as album closer “Diggin’ My Own Grave.” Wisely (or unwisely) tacked on at the end of the album, “Diggin’” is the type of song that would rub more people the wrong way than any Christian leaning. It’s something only Godsmack or Nickelback would be enamored with.

One of those bands that stick out and actually have some degree of an identity, The Showdown prove to be as powerful, if not more than non-secular bands. And while their leanings may keep them out of the metal mainstream, they’re something the Christian metal scene should clean to and cling to hard –Blood In the Gears is convincing, but hardly world-beating stuff. That in itself, is a measure of success for white metal.