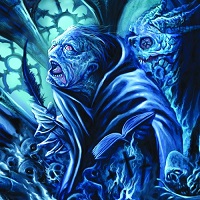 The Ruins of Beverast is the music of multi-instrumentalist Alexander Von Meilenwald, ex-Nagelfar drummer, and prophet of the blackest doom.  Here he assumes the role of the infamous Inquisitor of the Catholic Church, Heinrich Kramer.  Kramer penned the notorious treatise Malleus Maleficarum, in 1486, which translates to “The Hammer of the Witches.”  Misogynistic to the core, it’s a witch hunt manual for the detection and prosecution of witches, outlining procedures for their torture and killing.

Mainly a slower-paced experience, this album is by all rights doom/black metal – both.  But if you’re like me and have no time for the trendy occult doom fluff polluting today’s metal, fear not.  This is black doom of the highest order (file it under black metal).  Ominous atmospheres rich in synthesized textures drape a dense backdrop behind the blasphemous beauty within.  Von Meilenwald’s guitars absolutely shine throughout the album with crushing riffs and ethereal notions.  Vocally, he is outstanding, especially as the hellish voice of the Inquisitor, and he flexes some clean-vocal muscles in small but tasteful measures.  The lush production is a wall of sound, polished with clean-as-a-whistle drumming.  The theme of the subject matter is strongly emoted through the use of organ, choir and spoken Latin for a truly religious experience.

Now, take a look at the album artwork.  I have to say, that in only the way that art can, it accurately conveys the mood that this album creates.   Dark and evil, scary and elegant, other-worldly but human – and that color!  It’s perfect.

The Ruins of Beverast is a name that belongs alongside other innovative masters of black metal such as Deathspell Omega and Blut Aus Nord, for this is world-class stuff.  Now here’s the catch – this hour and eighteen minute opus is long, and to be fair, grinds pretty close to dragging a couple times.   It’s an album that is not so much a casual listen as it is a saga in which to envelop oneself and revel in the unholy power of this glorious creation.