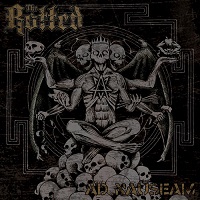 Best known for once going under the moniker of Gorerotted and making the switch to simply The Rotted for 2008’s cleverly-titled Get Dead or Die Trying, this British death/grind quintet have returned with Ad Nauseam. Not as British-sounding as one would think (save for a few nods to Napalm Death),Ad Nauseam picks up steam with the via death ‘n’ roll attack of mid-90’s Entombed and Desultory, albeit with more death metal punch and less rock.

action, which is sort of a necessary angle in all of this. The Rotted stick in their hands in various cookie jars, usually pulling out some rather intense bursts, like the punk-meets-death furry that is “Entering the Arena of the Unwell.” Because the bulk of the album’s 11 tracks are short, they are all the more effective, especially “Surrounded By Skulls,” which has what is easily the best chorus on the album, sure to elicit crowd participation from the sauced punters upfront.

The band’s Napalm Death influence becomes pervasive on the throttling “Apathy in the UK,” a song

that wouldn’t be too much of a reach for Barney Greenway and company. Some direct nods to Wolverine Blues-era Entombed slide in on “The Hammer of the Witches,” while the mostly noise-based “Put Me Out of Your Misery” caps off the album in successful fashion, a welcome reprieve from the constant battering of the Ad Nauseam’s previous 10 tracks.

A violent, no frills album that produces instant results, Ad Nauseam is The Rotted’s finest piece of work to date. Best thing is, the Brits can go virtually any way they please and they’re still good enough to avoid any subgenre trappings. Actually, Ad Nauseam might be better than the above rating indicates…