The Odious Construct – Shrine of the Obscene (The Artisan Era) 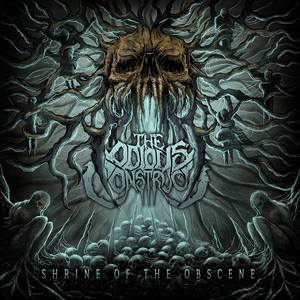 First hearing The Odious Construct a few years back with their self-titled EP, the band was scooped up by growing extreme label The Artisan Era for their latest EP, Shrine of the Obscene. As a young band themselves, this second EP solidifies them as not just as competent players, but ones to watch as they continue to expand their playing.

With a sound that sits somewhere around the more aggressive end of the melodic death metal/progressive realm, the most notable difference in the band’s style since 2016 is that of the orchestrations. There’s a greater emphasis on the synths that accompany the band’s sometimes blistering, and sometimes melodic assault (check out “Descension”). Nothing that ever inhibits the rest of the music, mind you, but it’s a solid piece of growth that aids them in further developing a sound all their own. The synths bring in some grandeur without being too obvious (as some bands of this ilk sometimes dabble in). Instead, much of the melodic thrust is within the guitarwork. While the band plays at some high-octane speeds (enough to give speed freaks a rush on that aspect alone), there’s always something going on to hold your attention and bring you back for more. There’s a certain technical aspect to some of the playing, but never at the expense of the musical flow, with explosive tracks like “Cyanide Eyes” can attest to. Above all, it’s the combination of all these aspects that allows The Odious Construct to feel frantic, but with a sense of restraint.

Shrine of the Obscene is a jump up from The Odious Construct and no doubt a stepping stone on the way to some ferocious yet catchy output in their near future. They’ve seemed to establish their identity quite well here, and as they continue to flesh things out, there’s bound to be some real gems for all of the extreme community to enjoy thoroughly.