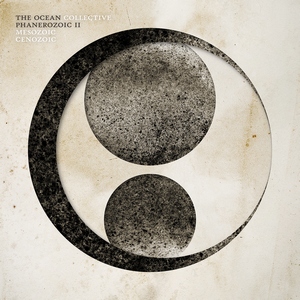 The sludgy post-metal act of The Ocean [Collective] finally finishes up their trip through time that began with Precambrian in 2007 and serves as a direct follow up to Phanerozoic I back in 2018 with this second portion of material. As with anything released by The Ocean, there’s a lot to absorb and dissect, but most importantly, it needs to be heard in a single listening session. As Mesozoic | Cenozoic takes us up to the present day from a geological time perspective, it tells a compelling and exploratory narrative.

Given that this one starts off in ‘dinosaur time,’ it’s fitting that the first two tracks (“Triassic” and “Jurassic/Cretaceous”) have some weighty riffs to get them off the ground. While “Triassic” does enjoy an effective build up before the fuzzy riffs begin to launch, it begins to hit hard as it sways between more playful and progressive melodies and moments of thunder. “Jurassic/Cretaceous” is probably the stand out track on the album, as it should be given it’s mammoth 13-minute timespan. Katatonia’s Jonas Renske also returns in the second half of this track (he guested on Phanerozoic I as well), and the juxstaposition of the raging grooves and shouted vocals and almost psychedelic and kaleidoscopic melodies make for a riveting climax – particularly given the notable mass extinction that occurred at the end of that geological time period. “Palaeocene” does a good job following it up though, with a more direct and heavy approach that feels like a rush of energy at points. From here, things get a bit more proggy and atmospheric in tone – with the band taking more musical risks compared to some other releases. It works well though, from the lurking yet triumphant “Miocene | Pliocene,” softer and prog-rock friendly “Eocene,” moments of blacked fury on “Pleistocene,” and the instrumental and somewhat exotic sounding “Oligocene.” There’s a lot of colorful textures on these later tracks, and it all flows quite naturally given the conceptual nature of the album.

As noted at the beginning, Phanerozoic II should be explored from beginning to end. It really enhances the experience as the ebbs and tides are far stronger than simply absorbing a track here and there (outside of the gargantuan standout in “Jurassic/Cretaceous”). It’s an atmospheric yet driven experience that stays playful in its mood while delivering some potently heavy riffs.