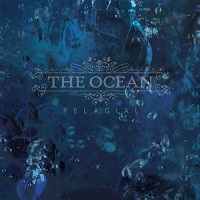 The Ocean doesn’t make albums these days. They make lateral, conceptually, pieces of craft. They’re craftsmen, basically. And any band that takes the measure of mixing, then re-mixing, then re-mixing again one of their albums (2010’s Anthropocentric, for example), means business. Letting go of an album for The Ocean is probably hardest thing for these guys, and so the proceeding Pelagial (the band’s sixth album) comes in as another multi-tiered, visual affair from a band that is now fully shed of the post-metal tag that accompanied them years ago.

Even though obvious, blatant bits of Tool (“Bathayapelagic I: Impasses”), Mastodon (“Bathayapelagic II: The Wish In Dreams”), and Meshuggah (“Bathayapelagic III: Disequillabrated”) enter in the sonic equation a little too forcibly, The Ocean’s modus operandi on Pelagial appears to have greater expanse than on prior efforts. The boisterous melodies on “Abyssopelagic I: Boundless Vasts” are of striking quality, helping lead the track down dingy alt-metal territory, while the restrained “Hadopelagic II: Let Them Believe” captures The Ocean’s minimalistic ability, as those gentle clean-channel guitars make landfall early and often.

Designed as a journey through five pelagic depth zones: epipelagic, mesopelagic, bathyalpelagic, abyssopelagic, and hadopelagic, Pelagial (which is  Of, relating to, or living in open oceans or seas rather than waters adjacent to land or inland waters; such as, pelagic birds) is as big of a sonic statement the band has made since their breakout 2007 Precambrian effort. Also, big props to singer Loic Rossetti, who narrates this tale with the sort of authority made for a frontman coming into his own. The same thing could finally be said for The Ocean as a whole, who appear finally ready to match their conceptual base with music that is just as thoughtful.