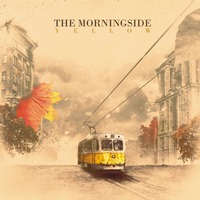 Yellow is the fourth full length album by The Morningside, a progressive metal band hailing from Moscow, Russia. Labeled as ”melancholic metal”, the album draws heavily on influences such as Porcupine Tree, Riverside, Opeth and a sprinkle of 70’s rock. The death metal parts are held to a minimum on this release, and really it is only the growled parts that hint at any prior melodeath roots at all.

As most progressive metal albums, this one takes a while to grow on you. The first couple of listens didn’t exactly blow me away, due in parts to production issues (the lead guitar being too high in parts, some melodic parts that would have needed further work etc). But being a fan of the aforementioned progressive metal bands, I gave it a couple of more shots, and sure enough it grew on me.

The musicianship on the album may not be up to par with the greats of the genre, but even if the melodies come off as a bit simplistic from time to time, these guys know how to utilize the skills they possess. After all, music is not all about technical noodlery. The Morningside rely on low- to mid-tempo tracks, such as the second song ”As a Pilgrim”. The tracks are all heavy on melodies and sparsely overlaid with a harsh growl that provides a bleak black metal touch. It works quite well together with the melodic lead guitars that are present for most of the album (so present in fact, that I wish they would have used them more sparingly for a more dramatic effect). The harsh vocals provide a nice break for the listener to focus on something else than those permeating lead guitar tunes.

Tracks such as ”Missing Day” and ”Clocks” provide a nice variation with the use of acoustic guitar, strings and well performed clean vocals, not unlike those of Steven Wilson (Porcupine Tree) himself. All in all this is a good melodic progressive metal album with some influences from doom (and I mean old school Candlemass/My Dying Bride-type doom here, not that droning hipster-doom so popular these days). Perhaps melancholic metal isn’t such a bad term for it after all.