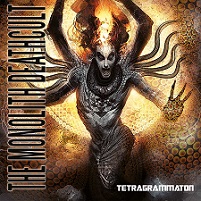 The accompanying presser with Tetragrammaton states: “There is nothing funny about death metal. Wrong!” Well, sometimes death metal is unintentionally funny, like certain songs on Morbid Angel’s Illud Divinum Insanenus or select works in the Six Feet Under catalog, and purposely comedic like the old-time works of Pungent Stench. It’s a mixed bag with DM, which might be a proper way to describe The Monolith Deathcult, who have taken samples and a supposed care-free attitude into the maelstrom.

Fundamentally, The Monolith Deathcult (who are from the Netherlands) find their footing in the traditional spread of brutal death metal, meaning, the obvious nods to Cannibal Corpse, Asphyx, and the like are made. However, the flexibility (and quirks) come by way of movie soundtrack-like spoken word bits on “Gods Among Insects” and “S.A.D.M.,” and partial techno on “Human Wave Attack,” where the Ayatollah is mentioned throughout. Weird we’ll bring these guys up, but this track reminds DR of American Head Charge. (Yeah, totally weird.)

Since a whistle is employed on “Drugs, Thugs, and Machetes,” all bets on Tetragrammaton are off. The track is one giant collision of Behemoth, Job For a Cowboy, and the tribal angst of early Soulfly. On one hand, it’s an inviting listen; a break from the norm. On the other, it’s going to leave some heads-scratching and might furrow some brows amongst the death metal hard-to-please brigade. But hey, art is all about pleasing oneself (hey, not in that fashion, you sickos), so the expansion on death metal’s sturdy base displayed here warrants some points, and a glance down the road.