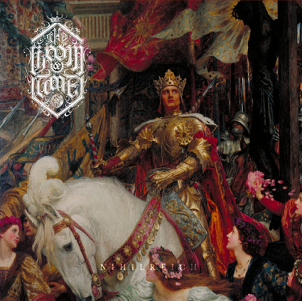 Odd seeing a non-black metal band on ATMF’s roster, try as the band and label may to position The Loom of Time as being of black in sound. (They’re not.) When you are certifiably underground and have fastened yourself to a particular style, then perhaps there is the occasional outlier, which applies to these Aussies. Formed in 2015 and comprising of Matthew J. Ratcliffe (vocals/guitars), Brad Delforce (bass), and Steven Reid (drums), The Loom of Time’s NihilReich debut is weighty, but also worms around proper categorization. A minor victory for a bunch of newbs.

Dominated by large, outwardly heavy riffs (think the next step beyond doom), The Loom of Time prove capable of parlaying said heaviness on opener “The Ashes of Your Fall,” which finds the bands dousing guitar melodies over crunchy, almost Carcass-like riffing. (For what it’s worth Ratcliffe has the whole disernable rasp thing down quite well.) A death metal surge propels “The Pinnacle of Hypocrisy,” which sees some speed-picking enter the fray, while a surprising array of syncopation is found on “The Greed of Lesser Men.”

To further muddle the mix, Ratcliffe employs clean vocals on “The Cries of the Weak,” which should outright negate any sort of black metal talk with these lads. (The 4:12 mark is killer, too.) There’s simply too much quality diversity going on here, a crafty mix of downright heavy gallops, minor chord swirls, and busy drumming, creating a hearty, if not substantial listen. To go one step further: NihilReich is the type of album that easily quenches the most basic of (heavy) metal thirsts. Score one for being heavy, or heaviness; words we can’t type enough in relation to The Loom of Time.