The Living Fields – Running Out of Daylight (Candlelight Records) 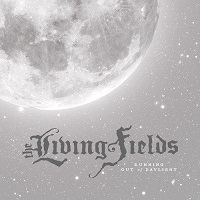 A sobering, yet seductive mixture of string work and Goth metal, The Living Fields paint quite the bleak picture on their second album, the appropriately-titled Running Out of Daylight. Naturally, anytime someone tries to sneak violins into the Goth metal batch, My Dying Bride is instantly recalled, yet this global troupe manage to find their own identity, although no one in these parts would complain if they kicked around some MDB-like ideas.

The violin and cello work of Chuck Bontrager and Petar Kecenovici provide the launch pad for many of the album’s memorable moments, starting with the heart-wreching opener “Remnant.” Here, the band ties together a waltz-like pace that intertwines nicely with the string selection, as singer Jonathan Higgs spews his emotive and very rigid bellow. Higgs ends up the being the album’s wild-card, oftentimes producing his own “hey look at me!” portions, including the tender moments during “When Walls Go Up” and the title track, which is formidable enough to rankle more than a few sensitive spots.

Elsewhere, the lengthy (read: over nine minutes) “From Miseries To Blood” provides the album’s doomiest moment, while “Glacial Movements” emerges as the album highlight, with a bouncing death metal tempo and fantastic chorus from Higgs, where the man steals some cues from the epic/Viking metal world. Through it all, The Living Fields are able to pique one’s interest, whether it’s a quick poke from the string selection, or a lavish vocal phrase from Higgs.

Clearly the work of a band who has yet to find their ceiling, Running Out of Daylight emerges as one of the year’s more somber and striking efforts. With the Goth metal scene as frayed as ever, it’s always a positive sign when a relative newcomer (the band has been around since 2002, actually) manages to grab everyone’s attention. Just about masterful, this one.