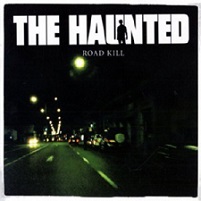 Would-be touring acts would be best be advised to either stay away from this DVD or take notes. Anyone thinking touring life is glamorous will be persuaded otherwise by Road Kill, primarily shot and directed by guitarist Anders Bjorler. The hard knocks, the grit, delays, are all captured here, and it’s expertly done…a bit more artsy than suggested. Best of all, it’s as real as its gets.

Starting with the band’s formation in the mid-90’s (after the demise of At the Gates), Road Kill provides a brief outline of the Haunted’s line-up, starting with the early exit of singer Peter Dolving, into the induction of Marco Aro (1999-2003), back to Dolving’s return. Aro’s distaste for touring life is well-documented, as is drummer Per Moller Jensen’s dislike for pretty much, everything. The Bjorler twins (the other being bassist Jonas) are portrayed as being tired and grumpy, which explains their glum disposition.

There’s no real climax to this DVD; rather it’s a combination of various footage and snippets, some funny, some not-so funny. Dolving is always a great interview (the clip where Per Moller Jensen drinks the man’s sweat is priceless), while backstage shots from Ozzfest run in congruence with the regular complain of having too much down-time. In fact, that’s the one resounding theme: all downtime, little play make The Haunted dull boys.

Tacked on is a live set in Amsterdam, which totally stays away from their immaculate self-titled debut, although “The Medication” and “99” prove to be imposing. The CD portion mirrors the visual portion, but does appease this scribe’s wishes of self-titled songs in the form of “Hate Song” and “In Vein,” and a few Made Me Do It cuts such as “Bury Your Dead” and “Dark Intentions.” Good stuff, nothing mandatory, though.

The career trajectory for The Haunted has been levelled off into low gear, primarily due to the spectre of the aforementioned self-titled and Made Me Do It albums. This is merely indicative of the band doing things they’re own way; re-writing both of those albums would have been a cop-out. With that in mind,Road Kill isn’t your typical “band on the road” DVD, and it sorta runs in line with that The Haunted has been doing the last six or seven years. Makes sense.