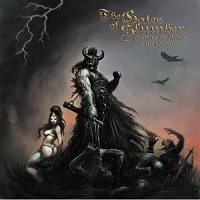 Throughout metal’s long-standing history, two aspects that remain exhilarating are the power of creativity and the chemical component of how musicians interact and engage in their craft. Indianapolis, Indiana’s The Gates of Slumber concoct as a trio quite the potent cocktail of doom, classic hard rock and a myriad of melodic British metal of the late 70’s/early 80’s variety on their fourth full length, Hymns of Blood and Thunder.

Recording the album in full analog illustrates the three-piece commitment to delivering music without studio chicanery or hyped-up, trigger-happy sampling. You’ll feel Jason McCash’s thick bottom end bass thumping your chest in “Death Dealer,” and stir with the slow crawling guitar riffs from vocalist Karl Simon on “Beneath the Eyes of Mars” as if you are taking in a long lost Candlemass offering from their Nightfall masterpiece. Lest we forget the open-ended strength of drummer Bob Fouts, who can keep the groove tempo on high and ensure monumental foot tapping or hand clapping on all 10 tracks.

You’ll hear solo work that also comes from a traditional framework rather than sticking to tried and true Iommi worship, as the almost 11 minute long epic “Descent into Madness” comes from more of an emotive, building Thin Lizzy design where Karl has a plan mapped out rather than throwing down a barrage of unnecessary hammer-on technique. His voice also takes the best of Wino, Glenn Danzig and early King Diamond and creates an evil, haunting vision to carry these tales of war, death and fantasy.

Much like Grand Magus in Sweden, The Gates of Slumber nicely blend the past and present into a great style that should capture a wide following. They prove doom still has viable life and exploration, and I predict a strong career for this act from this point forward.