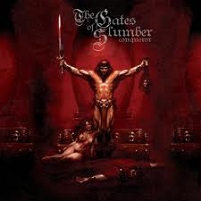 of the classic stoner doom ilk, Chicago’s The Gates of Slumber suffer their fair share of indignities throughout this 60 minute-plus marathon. There are no surprises, the riffs have been recycled time and time again, and at various points, the album just loses steam. Yet, Conqueror is a winner, oddly enough. For all of its negative aspects (which no one playing stoner doom seems willing to rectify), Conqueror emerges as one of those albums that pique curiosity around the bend. And for any album to accomplish that in this age of total clusterfuckness, is a minor miracle.

Blessed with one of the better albums covers in recent memory, Conqueror’sproduction job is handled by the emerging Sanford Parker (Nachtmystium, Gigan, Mouth of the Architect), who captures a very real and raw band that is just hitting its stride. Case in point, the stirring “Children of Satan,” a jam that is a total doom-dozer. Or how about the graceful opener “Trapped in the Web,” where singer

Once into the teeth of the album, things tend to slow down to a crawl, as “To Kill and Be King” and “The Machine” tread some unnecessary ground. However, the closing “Dark Valley Suite” is truly mammoth, seeing the trio touch upon a myriad of emotions, only to let it all unravel is haze of guitar

The minor classic metal touches give Conqueror some much-needed weight and hopefully provides a glimpse as to where the band is headed. For now, The Gates of Slumber find themselves in the enviable position of not only having a killer album to back, but a restless and needy scene that needs a classic stoner doom band who is willing to take a peek outside of the box, slow-footedness be damned.