The Francesco Artusato Project – Chaos And the Primordial (Sumerian Records) 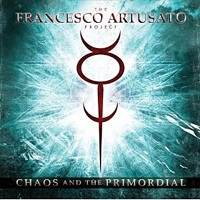 to the extreme metal crowd, instrumental albums likeChaos and the Primordial either land instantly or suffer from the cries of too much wanking, too much shredding, too much this, too much that. We’re hovering in between the two parties for Francesco Artusato, although it’s hard to deny the man’s considerable shred talents. However, one has to wonder if they taught songwriting composition at Berklee. Maybe not.

Right out of the gate Artusato (who is in All Shall Perish, by the way) is laying down the sweeps and frilly runs, a lot of which are impressive. The Egyptian influence on “Gardens of Yuma” are a plus, as is the Dream Theater-like start-stop action of “Layers of Corrosion – The Last Particle.” The man’s melodic capabilities are there as well, most notably on “The Madness Of…” where he gets down over a crunchy prog metal riff, and on “Ceased Time,” where an opening clean guitar

break leads into some spiraling riff-action.

Feedback on Chaos and the Primordial has been mixed thus far, although some people might be missing the boat, for instrumental albums have the leeway to be this jumbled. And yeah, a lot of these songs

aren’t structured very well, but there are some eye-catching moments that warrant Artusato to be in the discussion with metal’s top young shredders. How about this: Let’s see YOU try to play this stuff…