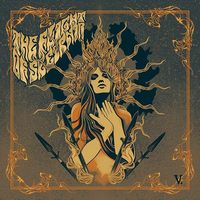 A not-so-subtle take-off on Agalloch, Colorado’s (really had thought they were Cascadian) The Flight of the Sleipnir are named after one of Odin’s horses, an eight-legged creature considered to be the “greatest of all horses.” Surely the Secretariat fan club would have a thing or two to say about that, but nevertheless, point being, this dead-set in the middle of the whole woodsy, sort-of-introspective, part-black metal partaking that the fine Agalloch lads perfected well over a decade ago. On V., all The Flight of Sleipir are doing is trying to update it for today.

Black metal shrieks, acoustic plucks, and a variety of instruments fill out the band’s sound, which at times, is mildly graceful. The extended plunge found on “Headwinds” marries folk-tinged sounds and atmosphere rather nicely, but, the riff selections and note choices don’t exactly evoke visions of originality. The dynamic “The Casting” may suggest otherwise, complete with a quality bass drop-out that is filled with gentle guitar hues, and of course, full-on throat scrapes from the peaks of the Rocky Mountains…or whatever geographical landmark is nearest to the band’s homebase. Elsewhere, the addition of female clean vocals adds another degree to TFOS’s sound, ending up as the album’s most momentous and harmonious jam.

At this point, the metal community has so much data and points of reference, that it’s quite easy to pinpoint who a band is patterning themselves after. And sure, the supply of Agalloch-like bands is short (probably because they’re such a unique lot), but The Flight of Sleipnir’s deliberate ventures on V. leave the band (and album) coming up a bit on the wrong side of things. Nevertheless, it’s somewhat of a majestic outing…just like the horse in which they are named after.