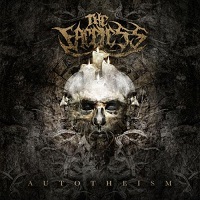 As George “Mr. Scary” Lynch once put it, the musical definition of compromise is “doing the music other people want you to do, rather than the music you want to do.” Lynch and his Dokken pals of course, didn’t have todeal

with hordes of confused message board mongrels, or metal newbies who haven’t the slightest clue about real progression. All Dokken had to worry about was writing another power ballad in order to make the ladies happy. Therefore, it is presumed that all The Faceless had to do was write another version ofPlanetary Duality to appease the scenesters. They didn’t, and good for them. And yes, 80’s hair metal chicks > Sumerian-core kiddies.

The third album from these LA-based technical death metal wizards,Autotheism sees the band take one major, bold, daring, and lateral step to the right of their core sound. It’s the addition of clean

vocals by way of mainmain Michael Keene that is getting everyone’s knickers in a knot, which is odd, for one would have to assume the band’s audience is already well-versed in clean vocal-ville. Nevertheless, Keene’s non-growled vocals are hardly polarizing; rather, they add some light to the band’s sound, as heard on “Autotheist Movement III: Deconsecrate.”

Plenty of voltage and wattage still exists within The Faceless’ death metal framework, with Keene and co. laying out bursts of extremity on “Accelerated Evolution,” “The Eidolon Reality” and “Hymn of Sanity.” However, it’s the melodic and experimental angle of the album that really gets the nod here, with Keene’s solo at the tail-end of “Autotheist Movement II: Emancipate” and closing “In Solitude” serving as the prime selling

points in regards to the band’s expansion.

A veteran move by a band that is anything but veteran, Autotheism is going to cause some serious ripples amongst the band’s fanbase. Clean vocals are always a touchy subject, but hats off for how they’re included here – Keene’scleans

are wholly enjoyable. By doing this and veering off the beaten path, The Faceless have endeared themselves to those who are in it for the long run. We’ll be around long after the kiddies ditch The Faceless and if it plays out the way it should (and it will), so will Keene and co.