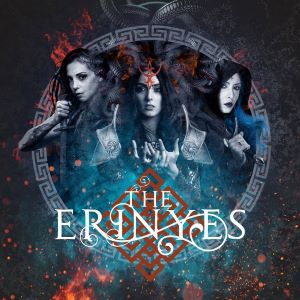 Probably an instant selling point with fans up to date with the symphonic metal realm based on the members involved, The Erinyes merges three up and coming vocalists in that Frontiers-type of supergroup formation.  In this case, we have Nicoletta Rosellini of Walk in Darkness and Kalidia, Mizuho Lin of Semblant, and Justine Daaé of Elyose belting out symphonic metal in an angelic/anthemic supergroup.  But with super expectations, something that feels more ordinary and ‘less super’ isn’t going to cut it.  Something that The Erinyes unfortunately suffers from.

The biggest issue here is that the three sirens are playing right into their usual wheelhouse.  All three vocalists come from some sort of a symphonic background, despite some obvious differences in approach, and that’s exactly what you get here.  More of the same.  Nothing against that, and if you are down with just hearing the power of the three of them belting out some symphonic metal, you will not be dissatisfied with this.  But when you stack this against other ‘supergroups,’ as something like Exit Eden quickly brings to mind, it lacks that ‘wow factor’ and extra finish with the players involved.  This scribe would love to hear these three going at something more unique than the symphonic metal standard given this excellent opportunity – not necessarily covers like the aforementioned Exit Eden, but branch out from the usual and put a different spin on it.  Make it stand out from their usual material.

Gripes aside, for what it is, The Erinyes is a enjoyable enough symphonic metal release.  “Betrayed” hits all the notes that it should, with a banger of a chorus, and even a solid solo later in the track.  The soloing does need some acknowledgement, as it would have been simple enough to just come out of the studio focusing only on the frontwomen, but most tracks have some admirable guitarwork to back them up.  Around the halfway mark, we get a break from the hard rocking symphonic stuff and slow down for a more ballad-y number that wisely avoids the cheesy flavors they could have drowned in.  Closer “You and Me Against the World” also veers from the standard with a more mid-tempo epic number shifting the priority more to the three vocalists and ends things on a high note.  Considering the vocal priority, how do the three of them sound together?  Quite lovely to the ears, as they trade off parts and occasionally come together for some potent moments (see “Drown the Flame”).

In the end, diehard symphonic fans will likely savor this release even if it does play it safe.  The Erinyes follows well-tread ground, and the tri-vocal approach isn’t really enough to make it stand out more than individual releases from each of their respected main bands.  It’s hooky and catchy, and does what it is meant to do, but never feels special enough to give it more than a few passing spins.