The Empire Shall Fall – Awaken (Angle Side Records) 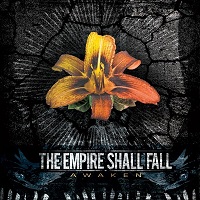 Jesse Leach’s post-Alive Or Just Breathing output hasn’t caused very many ripples (see the Kyuss-influenced Seamless), but expect that to change with The Empire Shall Fall, which is Leach’s first foray back into real metal. And by “real” metal, we mean diversified metalcore in all of its shades and hues, with Leach serving a full vocal aerial assault.

Killswitch this is not, as Leach purposely stays away from the formulaic growled verse/clean chorus template KSE is so enamored with. Instead, Leach pulls from every orifice of his voice, from his patented cleans, to shouts, to Lindberg-styled death metal vocals. It’s quite the array when stacked up next to the challenging song

structures of “Lord of War,” which goes from technical metalcore to Southern rock in one fell swoop.

In reality, The Empire Shall Fall’s inability to stick with one style ultimately hinders Awaken. For every startling moment (the beginning of “Choir of Angels,” the mammoth chorus during “Voices Forming Weapons” and the melodic swirl of “We the People”), TESF has too quick of a trigger finger. All this does is spreadAwaken a little too thin, even with Leach’s vocal acrobatics and motivational lyrics.

Despite the above musings, the KSE crowd should eat this up. Leach’s work on the first two KSE albums is apparently stuff of metalcore legend (it pains us to say that), thus establishing The Empire Shall Fall as the more manic, multi-faceted alternative to the commercial

, sugary-sweet stance of Killswitch and friends.